“Disclosure: This post is sponsored by Cedar Fair Entertainment Company in conjunction with Blog Meets Brand, and I have been compensated for my participation. All opinions are my own.” 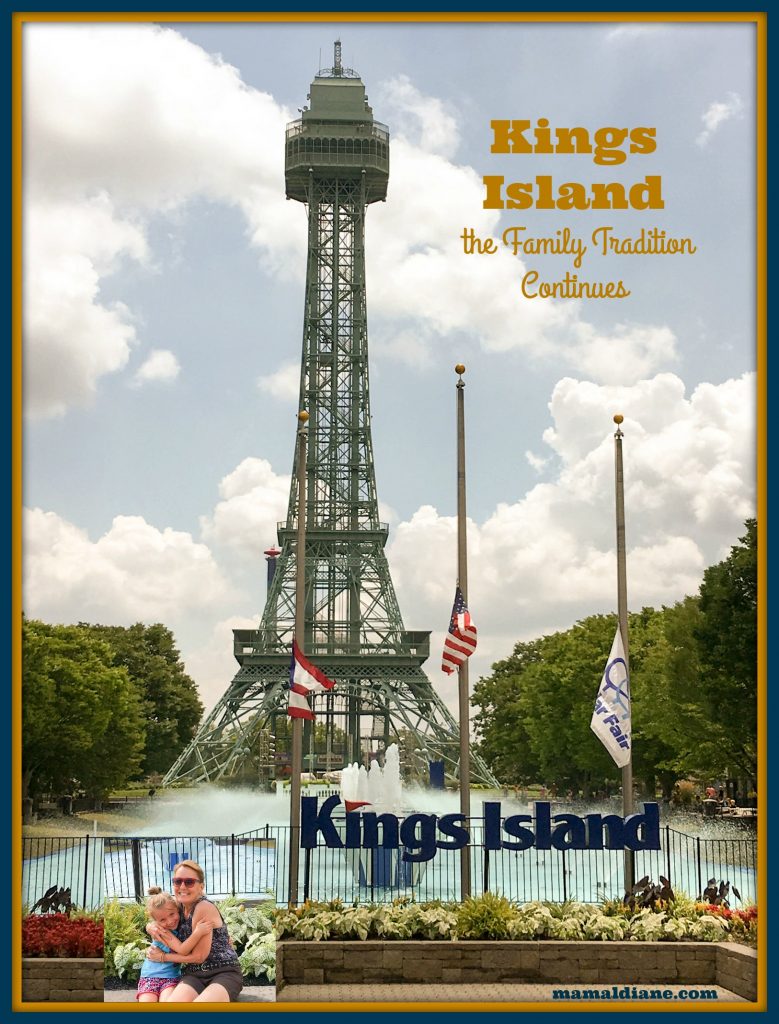 My oldest sister got married in 1967 (I was 7 and devasted) she moved to New Jersey with her new husband.  Each year, in the summer, we would drive to visit them. We would rent a cottage that we all shared at the Jersey Shore. Good times! Later in the summers, they would drive to visit us in Ohio. We always found special things to do when they visited. In 1972 Kings Island opened in Mason Ohio, that’s about 45 minutes away from us. We started going that year. A family tradition was born!

Here’s the last family photo that was taken at Kings Island. (2014) That’s me, and my 2 sisters on the right. 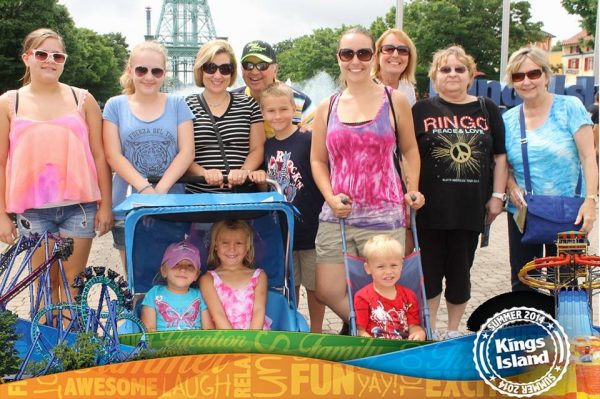 Kings Island has evolved many times since 1972. Added many new rides, some stayed some went. They added an awesome water park called Soak City, it’s enormous!

Our visit this year focused on my grandkids. Kings Island has a fantastic children’s section of the park called Planet Snoopy, the 15 time Gold Ticket Award winner! They have a collection of PEANUT-themed rides for every age, including 4 coasters. My grandkids were so excited!

After we entered Kings Island the large water fountain on International Street and the Eifel Tower got the kids attention. They didn’t get excited when I suggested taking a picture by the Kings Island sign. They wanted to ride some rides! Hey, I had to have my picture, it’s tradition! 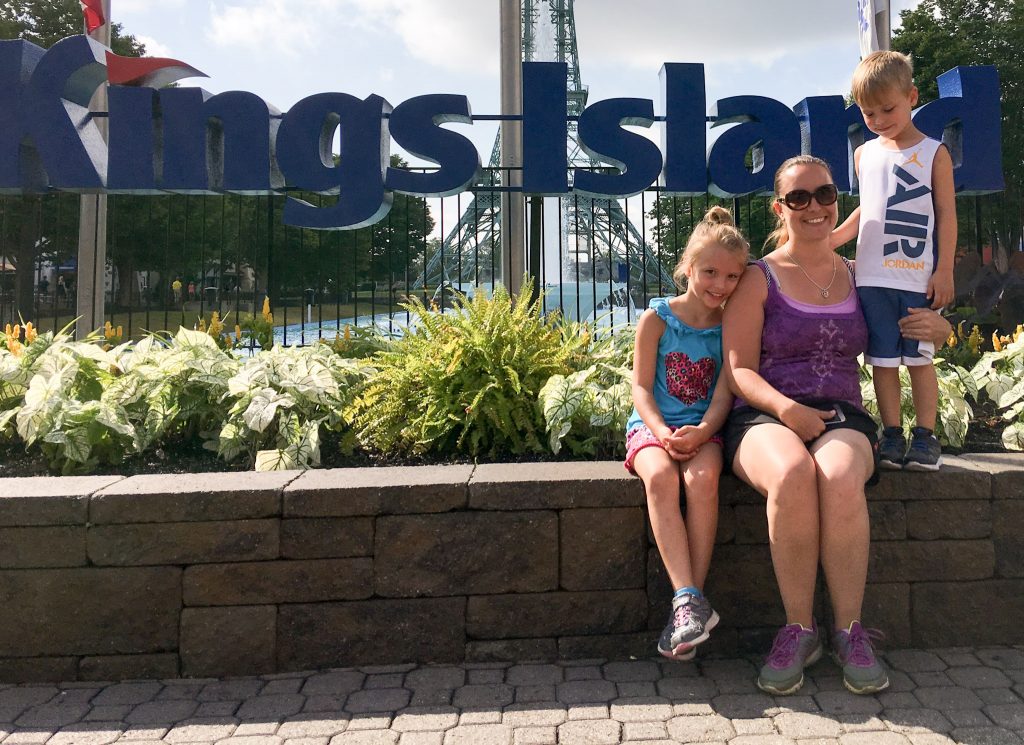 Okay, now we’re on our way to Planet Snoopy! Yay! 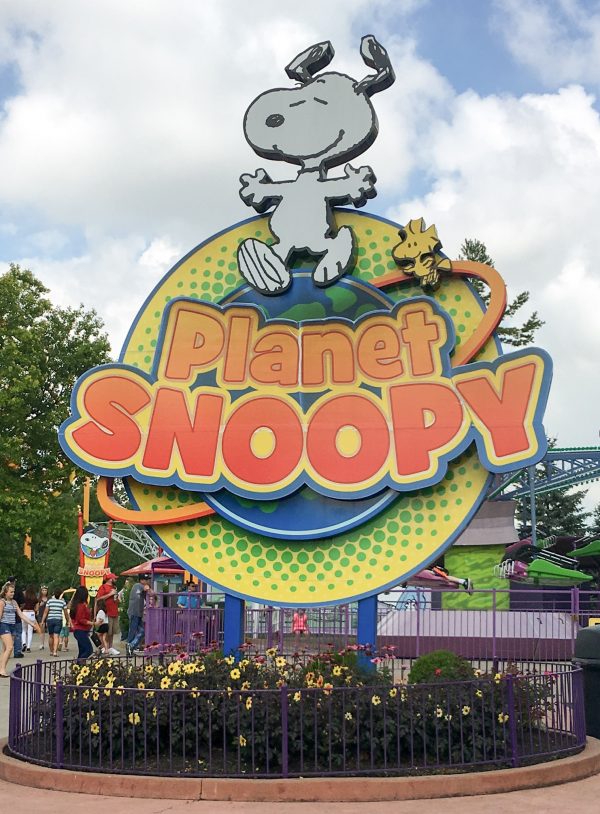 The first ride we came upon Charlie Brown’s Wind Up they had to ride just because it was there, ha ha! As you can see by the look on their faces they loved the ride, which they ended up riding several times. 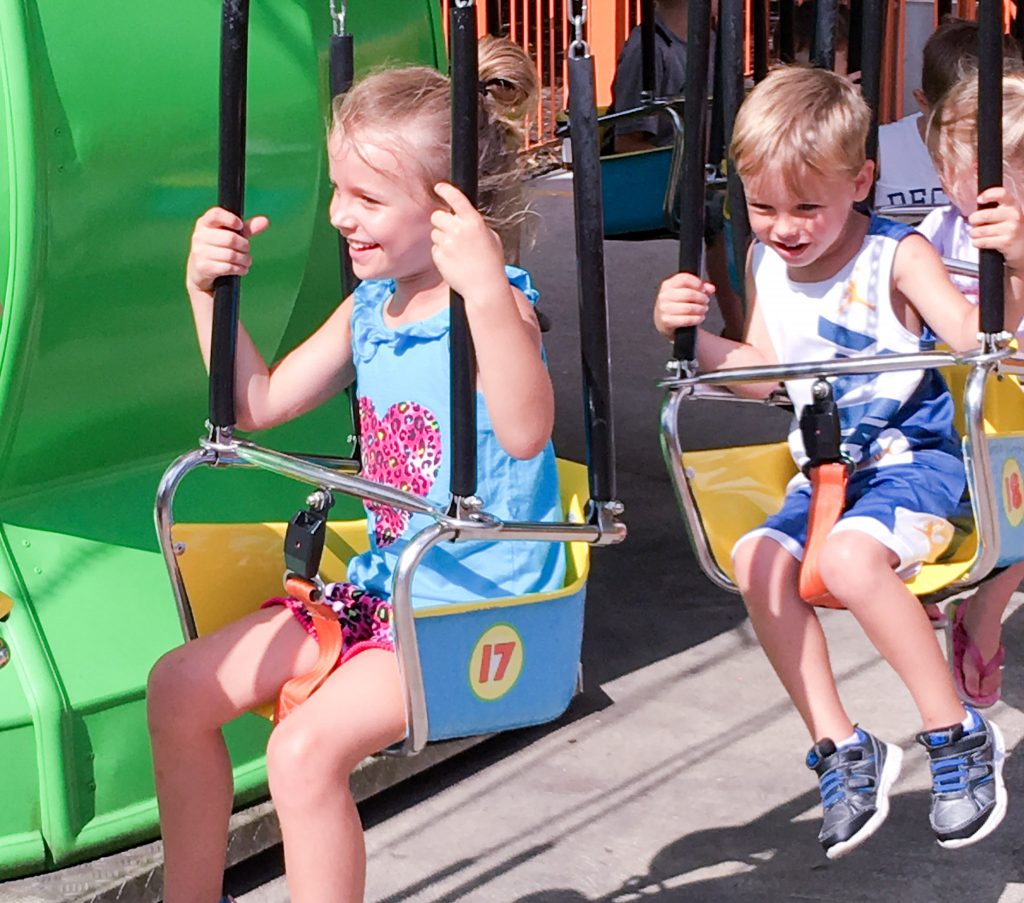 Once Ty saw they red airplanes he was all in. He loved the idea of riding in an airplane, the fact that they were all red was a bonus, that’s his favorite color. This high flying ride is called Snoopy vs. Red Baron. 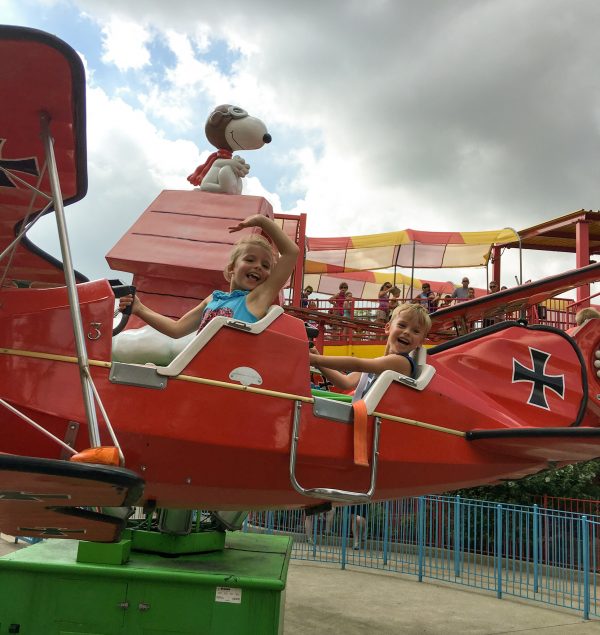 Look who we found! A few hugs and we were on our way. Hanging out with Snoopy 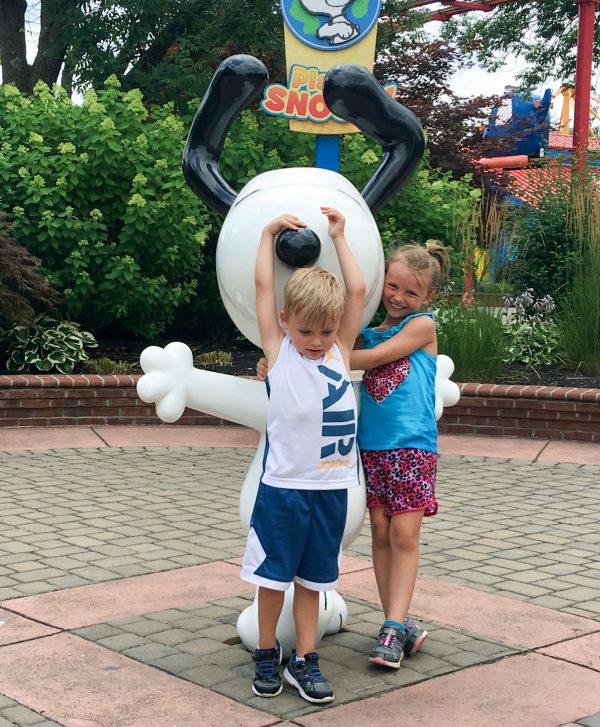 Woodstock Whirly Birds are elevated helicopters where parents or grandparents and kids can ride together and get a scenic view of Planet Snoopy. Hey, look out the window, I see Charlie Brown! 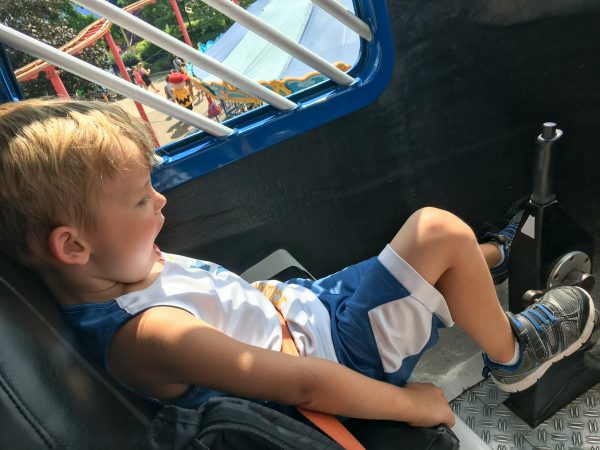 Slushies were a “had to get” for the kids. It was pretty hot the day we went, and they were perfect to help keep them cooled down and hydrated. These are cool cups, they can be refilled with pop or slushie for a reduced price or water for free. On a hot day, they were totally worth it, and they made nice little souvenir cups. 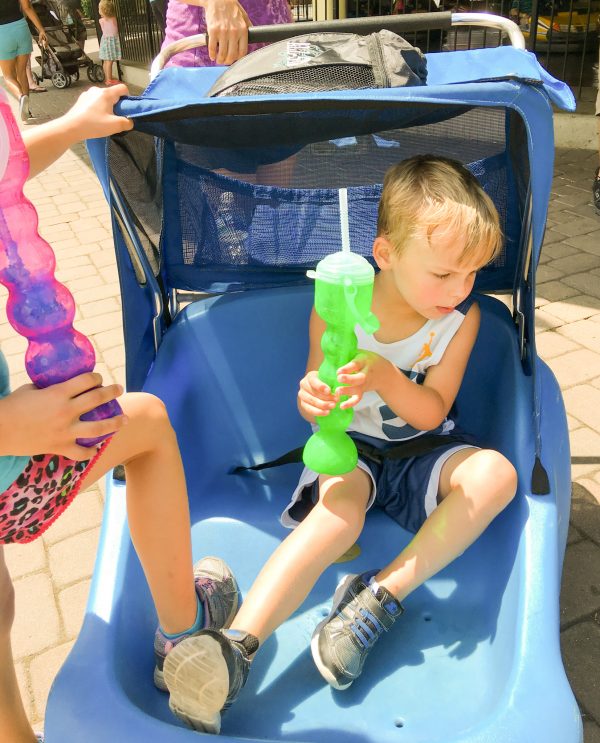 Listening to this awesome band in Planet Snoopy was fun. Made us all want to dance. 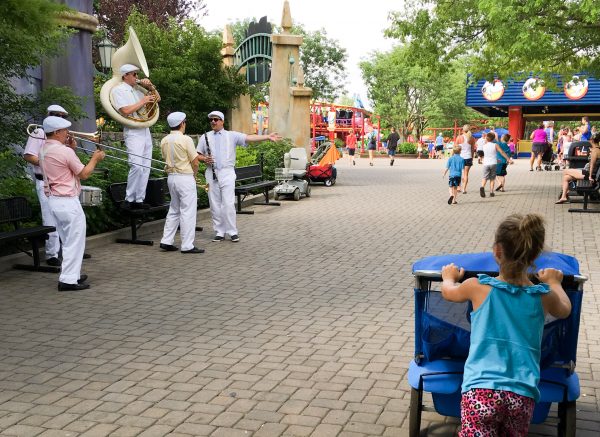 Woodstock Gliders were a little too exciting for Ty so he sat this ride out. K rode them a couple times all by herself. 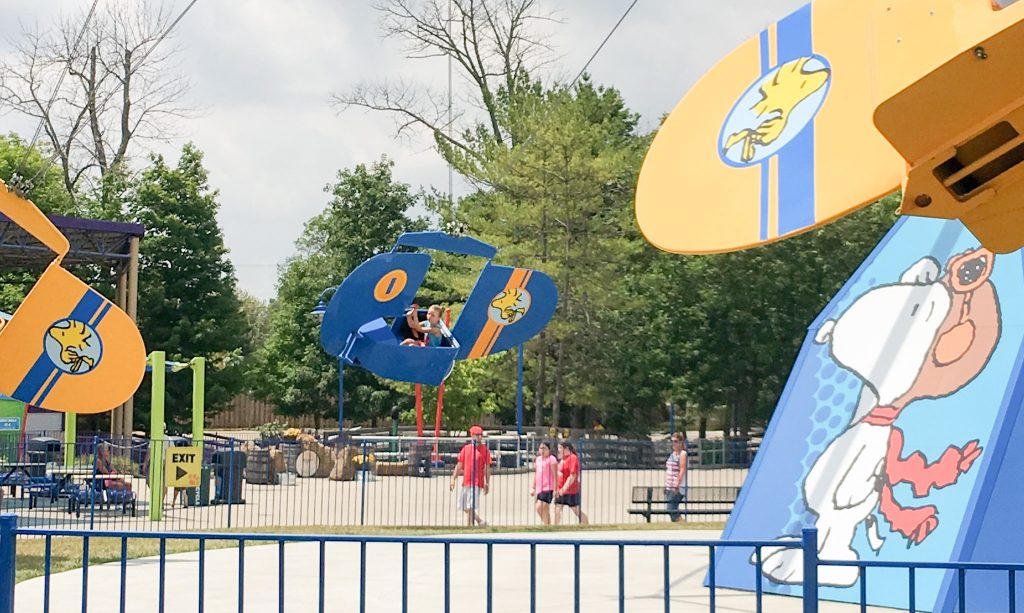 Snoopy’s Space Buggies go up and down, and round and round. They were in heaven. It was a little more adventurous than the Woodstock Whirly Bird, it was just enough excitement for Ty. 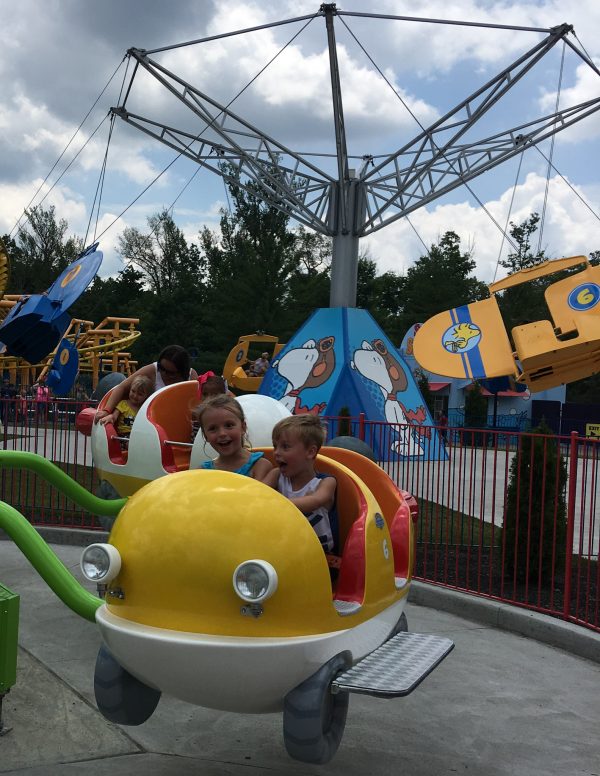 Kite-Eating Tree is another ride Ty decided to pass on. K went on it with her mom, as you can see by the look on K’s face she was enjoying the ride immensely. 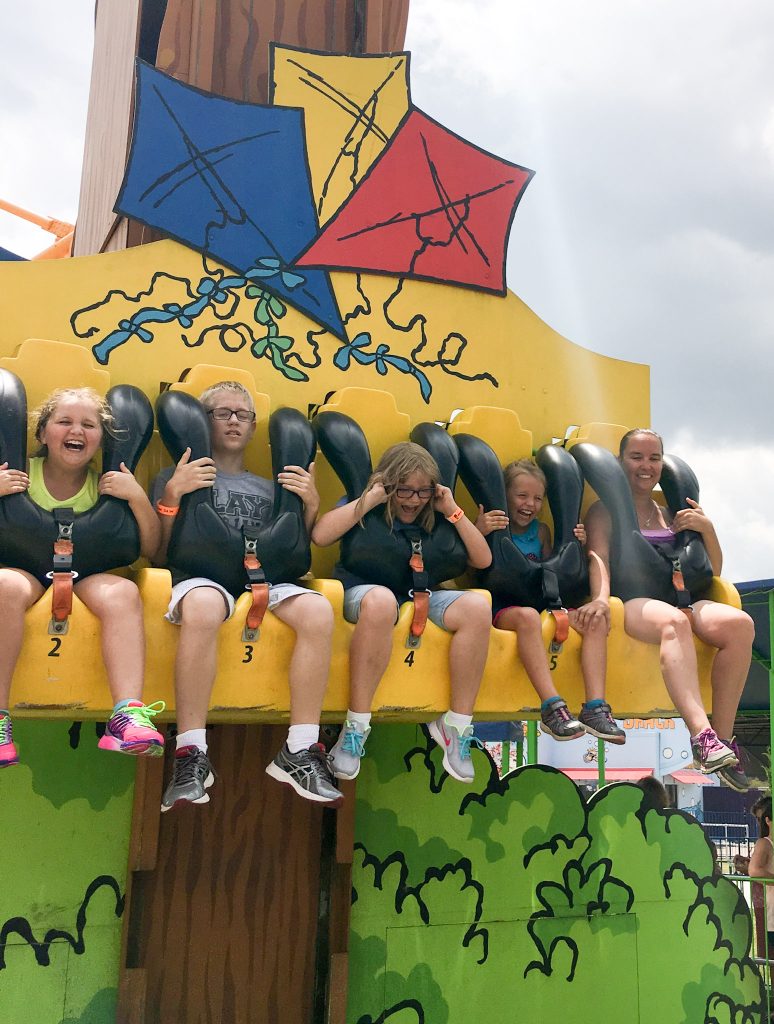 Peanut’s 500 made the kids feel like they were driving. The scenery was really cool and the road crossing over so they go over the road and under the road. They really enjoyed this race car ride. 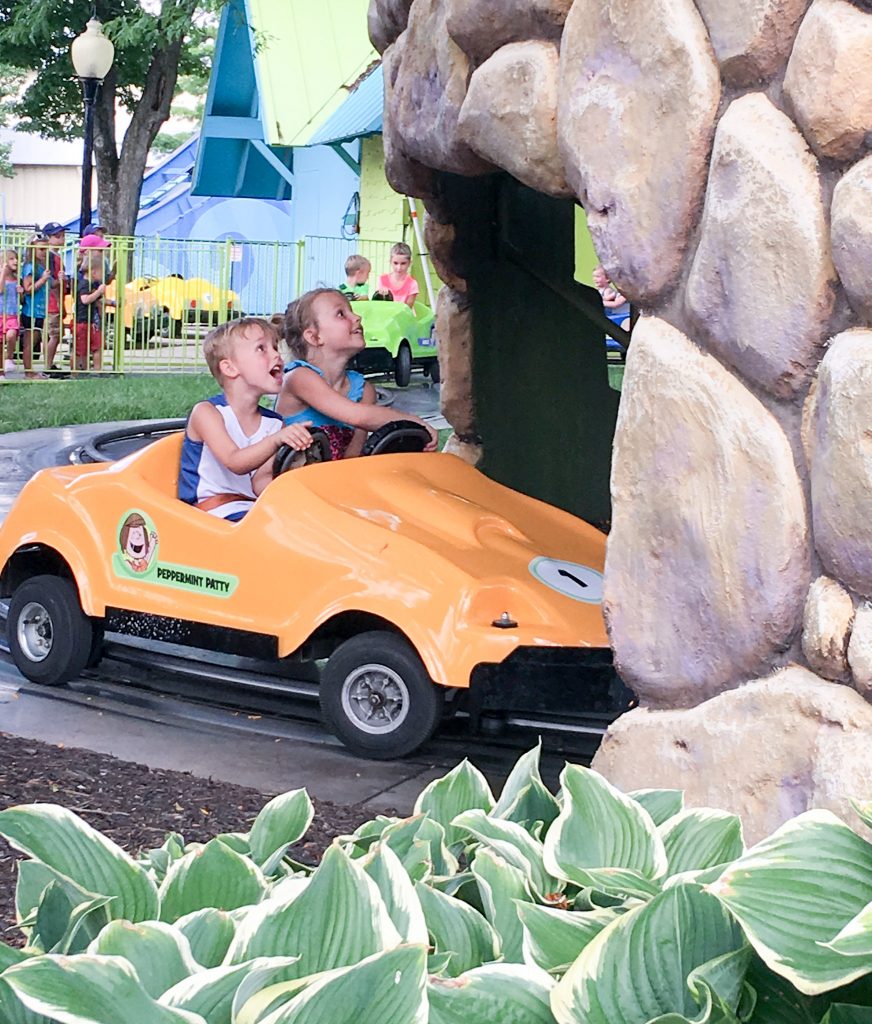 Look who we ran into, Lucy! She was taking a stroll around the park and was kind enough to let us take a picture with her. Ty was a little nervous, she didn’t look like any girl he’d ever seen. He stayed close to me. Ha ha. 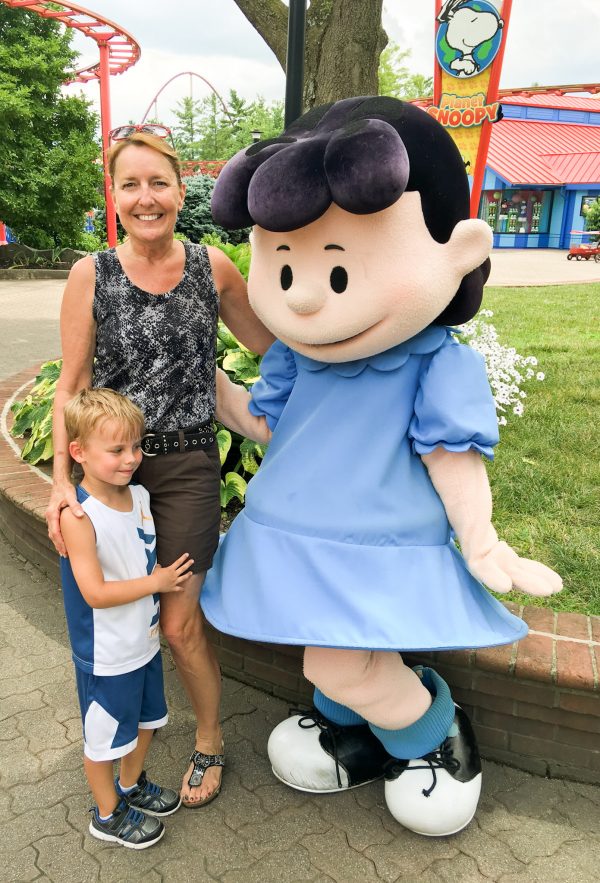 The Great Pumpkin Coaster is the perfect size coaster for the young kids. I think it goes pretty fast with a couple little hills. 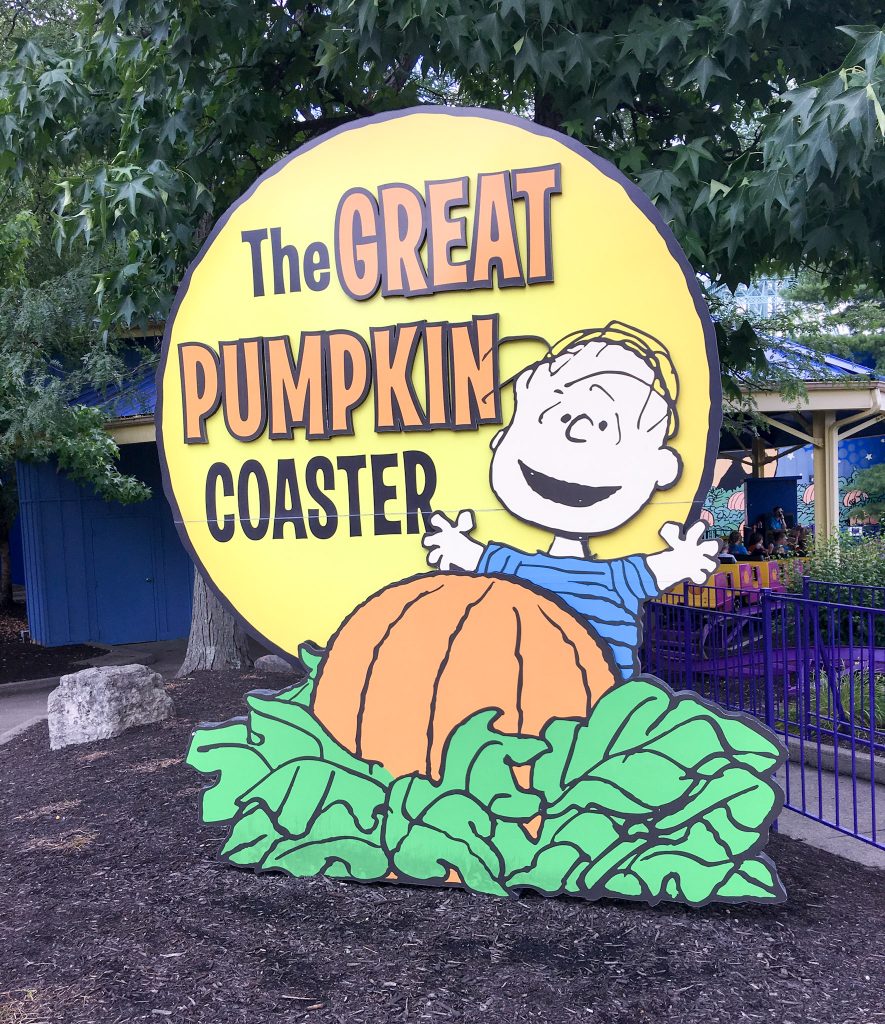 Woodstock Express is for the more adventurous. Which apparently K is turning into. I couldn’t get a good picture of her on the ride, Ty was getting a little grumpy. I think after this, it’s time for something he’s been waiting for weeks to see. He’s checking the map to find the best way to get there… 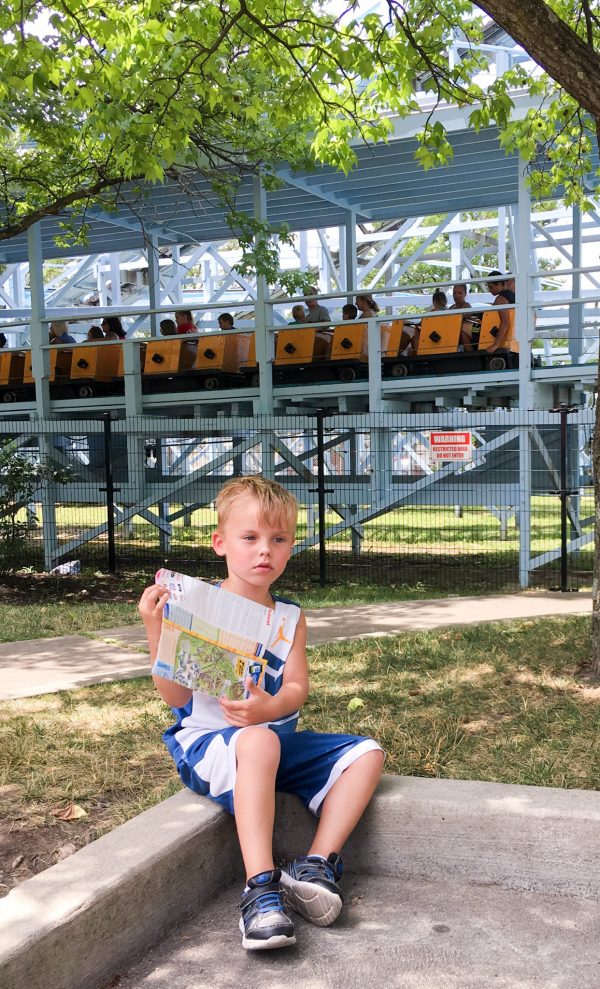 Dinosaurs Alive! Is the world’s largest animatronic dinosaur park spend over 12 acres. The dinosaurs seem to come alive as you make your way down a winding path. I’m not sure who was more excited Ty or me? I admit it I have a secret fascination with these big guys. 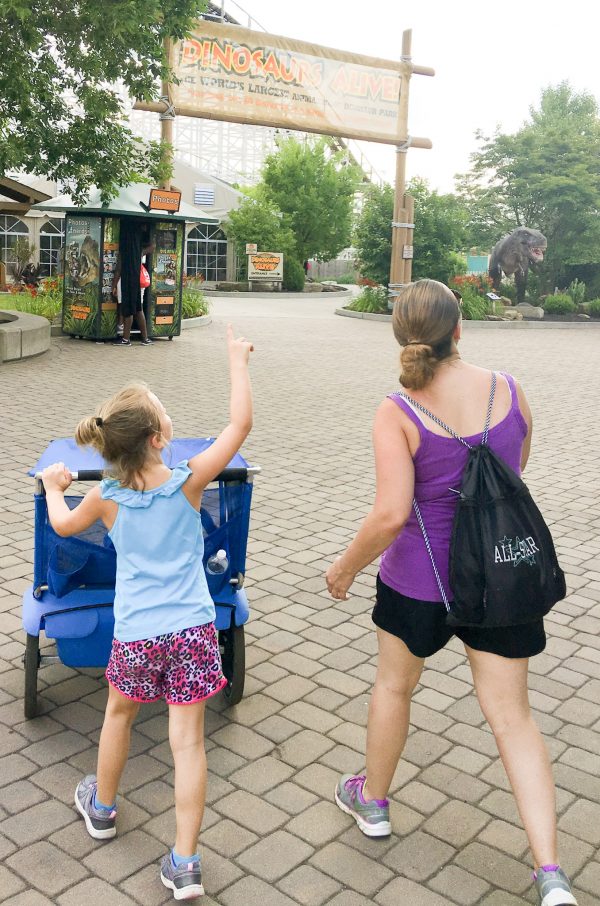 Ty was talking a mile a minute because he was so excited to finally get to go and see the dinosaurs. He wasn’t sure what to expect. He wasn’t sure if they would be real or not. I have to say, there’s nothing like watching your grandchildren’s face as they experience something for the first time. 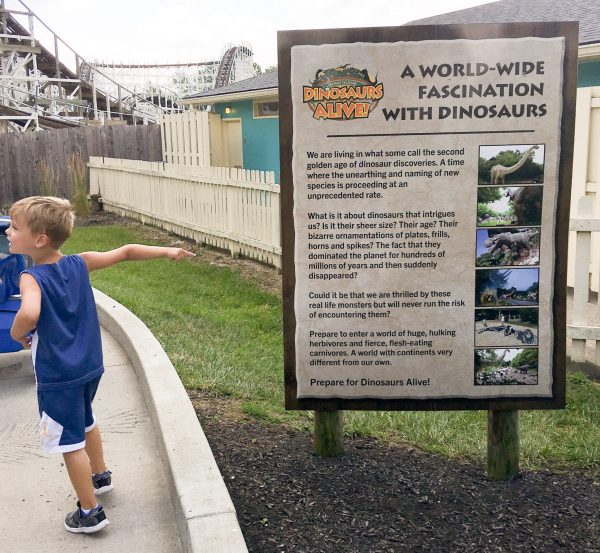 When the dinosaur started roaring/talking Ty jumped back and said, “they’re not real, right?” He wanted to double check because the farther we walked down the path the bigger they became. 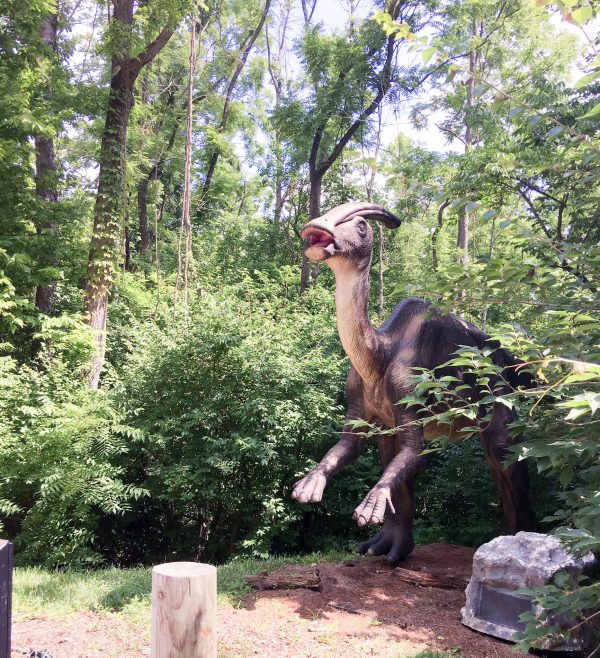 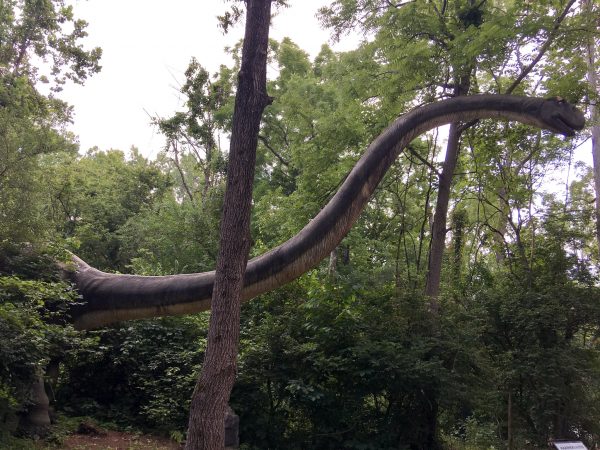 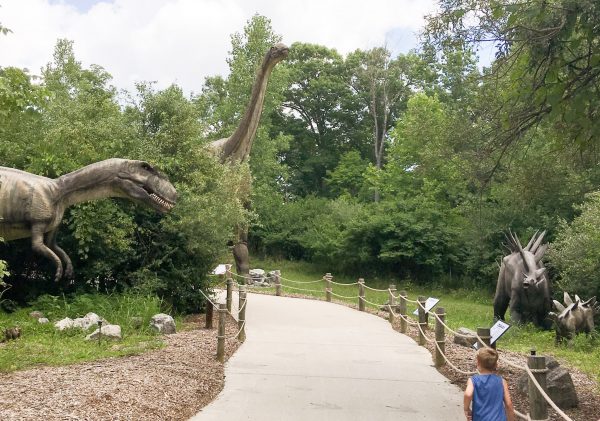 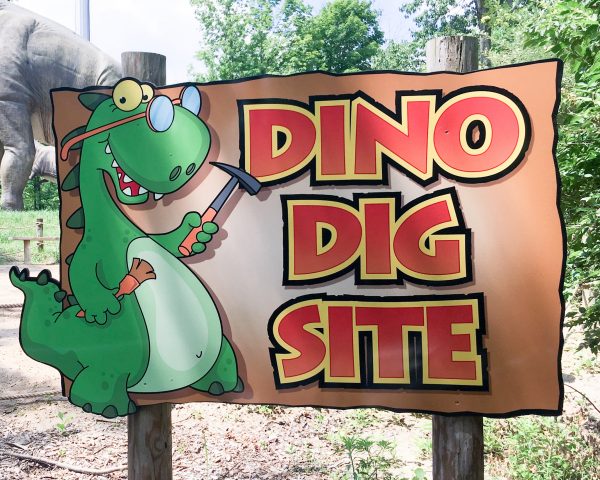 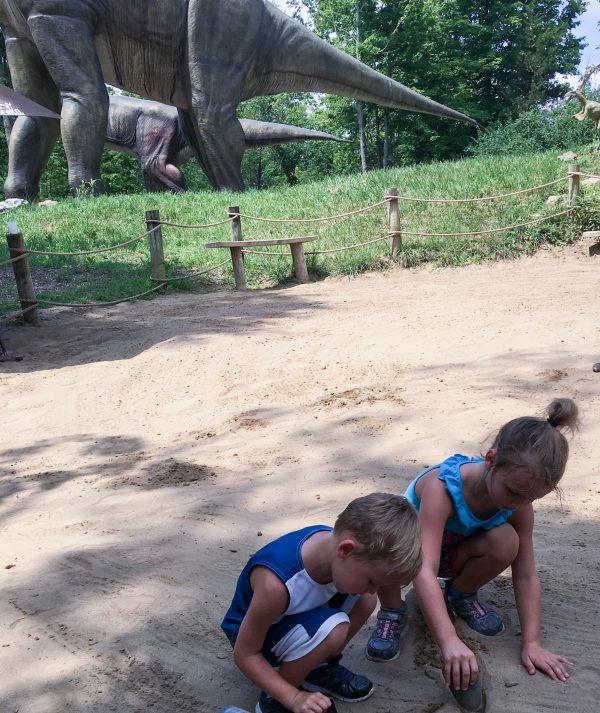 While the kids were busy digging away I wandered off and met this not so friendly big guy, I managed not to lose part of my skull, or be a dinosaur snack. Whew… I’ve been known to get into some predicaments. Luckily not this time. 😉 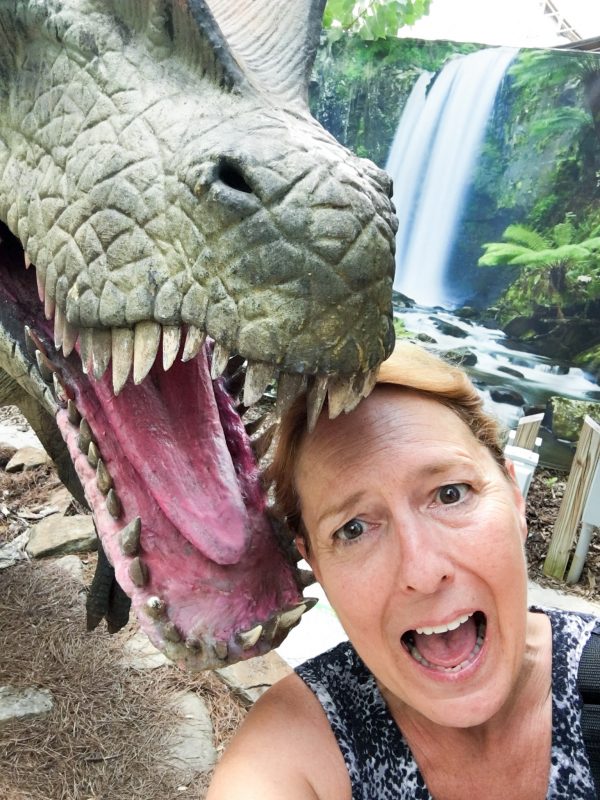 It was getting late in the day, we had planned to go and check out Soak City but the weather showed a storm blowing in and we decided to head for home.

Ty was happy and ready to go home now that he has seen the dinosaurs. 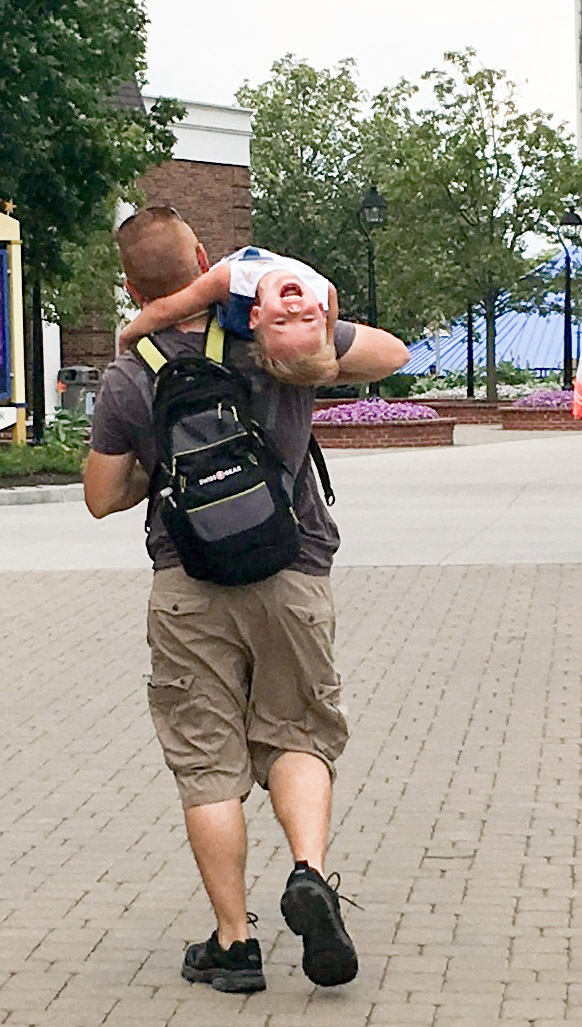 If you’re looking for a great way to spend the day with the kids this summer I highly recommend Kings Island. It’s a park full of thrills and has something for everyone.You can spend the whole day riding rides with the kids, and if it’s hot, grab your suits and head over to Soak City for some cool, pool, thrills and chills! It’s a great deal!

For more information about Kings Island, you can follow them on social media.

After all, This is Your Kids Fun