Americans and Hamburgers: A Love Affair 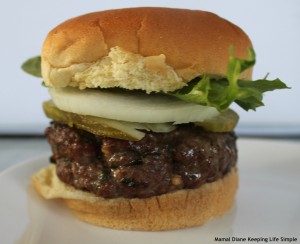 Americans love their hamburgers. Ground beef on a bun is only the ground floor that this obsession is built on. The seek them out from the processed frozen burgers of fast food restaurants to the hand chopped beef steak served on fresh backed specialty rolls that can be found in a high end restaurant. Garnishes and toppings add fuel to the fire as the quest for a good burger goes on.

For over a century, hamburgers have been making the American people salivate. It was a working class meal for a working class people. It made people feel good by letting them step away from the rules of etiquette occasionally. Sandwiches were for lunch at work or at school. Dinner was a time to sit at the table and eat your food off a plate with silverware, as was proper. Suddenly, it was allowed to have a sandwich that was still a hot meal as a family. You could eat with your hands and not be socially awkward.

Small restaurants and diners followed the trend. Hamburgers began to appear on menus next to the steaks and pork chops. Toppings were added to enhance the flavor and to make it more of a complete meal in itself. Sliced onions and tomatoes made sure that children were getting their vegetables. Cheese and pickles changed the taste in new and intriguing ways. A new industry grew up with the making of special rolls that were the perfect size and texture to become the buns that exist today. The way was clear for the next innovation in the hamburger.

Roadside hamburger stands began to appear across the nation. They were individually owned and run and offered a convenient option for people on the go. It was inevitable that someone would start purchasing the stands and organizing them so they followed the same standards. It was the birth of fast food. People could travel from town to town and find a familiar restaurant that served exactly the same food as they were used to. The convenience continued to grow when they added drive in service. Now customers could remain in their cars and their meal would be brought out to them on a tray. The process was complete when this gave way to the drive through and they no longer even had to stop for food.

It is easy to see how the hamburger became such a part of the culture. Today there are multitudes of fast food franchises that each have their specialty hamburgers. Casual dining restaurant chains have built worldwide names based on their signature creations. Even in the back yards of millions of homes every summer, the smell of ground beef being cooked permeates the air. Not even the growing numbers of vegetarians and vegans have slowed the trend. Meatless veggie-burgers have brought them into the lifestyle with the rest of the population.

The Hamburger has even invaded America’s media. Television has shows that are dedicated to the food. Master chefs show how to cook them better and search out the restaurants that serve the best ones. Internet websites like Rick Schaden’s Burger Blog are dedicated to perfecting the artistry of them. Even entire cookbooks have been published with nothing but different recipes for hamburgers.

For a hundred years, the hamburger has been spreading through American culture. On average, they eat three of them every week with no sign of that number going down. Fast food franchises have expanded beyond the borders to different lands and cultures, taking the hamburger with them. It is only a matter of time until it stops being thought of as an American food and becomes a part of a global cuisine.